Menu
Log in
Register
Install the app
You are using an out of date browser. It may not display this or other websites correctly.
You should upgrade or use an alternative browser.

Thank you, I have to say the 'industrial look' isn't my style but it is popular with the younger people. I made another pair without the hammered steel back plate, and I will make more in different styles. I never know what is going to sell. I thought picture frames would be the big rage, but haven't been in the small fairs I have done. In 2 weeks I will be in a much larger one and I am hoping to sell a lot, just so I can make more. Below is a frame for a 5 x 7 photo.
Food has been spot on and I have spent 2 days out in the shop on my feet. not good for my knees but I took breaks a few times and sat down.

I like your stuff, Ann. It would match our house really well. I must frame some more pics. There's no point having them tucked away.

Staff member
I like your frame but I don't generally hang photos but will occasionally mount them if a photo contest calls for it.
G

I really don't frame pics myself either. On my walls I have some pics of my kids when they were little. high school pics, some ones of my grandkids my daughter gave me. Last October we took a day trip to the White Mountains in NH. It was drizzling and foggy, visibility was poor, but I took a pic with my phone at an overlook. In other years you can see for miles, but on this day, not so much. I didn;t realize until we were headed back how amazing the photo was. A lot of detail I didn't see with my eyes came out in the picture. I had it blown up to 12x26 and made a frame for it. It now hangs over my couch. A friend saw it on FB and asked me to make one for her, so that one hangs in a historic home on the coast of Massachusetts. The area I live in is rural and people like the log cabin and rustic look. Several of the ones I sold were purchased as gifts.
Last edited: Mar 29, 2022
G

it has been a crazy busy week. I clean up my workshop, deep cleaned all the rooms and got ready for houseguests. My boyfriend and his two grands aged 12 and 14 came down and we all went to the dog trial. The kids took turns running his 7yr old lab mix. Great time but a long day on Sat. Yesterday after breakfast we took them geocaching, then they did archery and horseshoes in my back yard, They went out with me to get the SD cards out of the game cameras, We got a really nice daytime video of a bobcat. Saturday night my security camera picked up a bear in the driveway.
Today I am having tea instead of coffee because I don't put milk in it. Going to do IF this week. I will have breakfast around 11 and dinner at 5

That sounds exhausting but so much fun!

It does sound like a fun but very exhausting day. How exciting seeing a bobcat on the game camera & a bear in your driveway!
G

I decided I needed to go back to intermittant fasting to try and shake up weight loss, I bob up and down 2-4 lbs for weeks before I finally see a loss. Got my head in the right frame of mind. My biggest issue(excuse) was that I have coffee as soon as I get up. For 45 years I drank it black, no sugar, then I gave it up and went to tea because it bothered my stomach. When I started drinking it again, I had to put stevia and half and half in it. So yesterday I had tea, which I really do like, but coffee is a habit. I had my last food Sunday at 3 pm, I fasted until just after noon yesterday so I had a 21 hr fast, my last food was 3pm, I don't plan on having 21 hour fast every day, I plan on 19/5 . Funny thing is I was down into NEW NUMBERS yesterday, so 23 lbs down. still a lot to go, but I will just keep plugging along. Here is a still shot from the bobcat video, a bit blurry, but you can see it. such beautiful animals 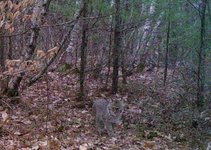 Yay for new numbers and how amazing to have bobcats roaming around!

It's interesting to read that the number of bobcats in NH is increasing. What a heart-warming change. I wish we could say the same about our Tasmanian Devils.
Well done on the new low, Ann
G

Yes, both bob cats and bears are on the increase due to management by Fish and Game. There have been petitions the last few years by people wanting a season on bobcats. So far it has been denied. Many years ago there was actually a bounty on them and they were hunted so hard we almost lost them. With good management they have increased. A lot of people want to shoot every coyote and exterminate them. They say they are eating their cats. Well, keep your cat in the house because it could get hit by a car, and eaten by a lot of other animals. Coyotes are the biggest predator of rodents and they keep the mice population from over running. Are the devils on decline due to habit loss or are they hunted, I have always been fascinated by the unique animals in Tasmania and Australia. Just reading that you live 'in the bush' is exciting.

The new low has showed up 2 days in a row, did IF again yesterday. I am eating 2MAD, and it makes it easy.

Getting Fit said:
Well, keep your cat in the house because it could get hit by a car, and eaten by a lot of other animals.
Click to expand...

Here in Aus cats eat a lot of native animals and also should be kept in their own yards but most people ignore the cat laws.

Getting Fit said:
Are the devils on decline due to habit loss or are they hunted, I have always been fascinated by the unique animals in Tasmania and Australia. Just reading that you live 'in the bush' is exciting.
Click to expand...

Tasmanian devils have struggled for two decades against a typically fatal, transmissible Cancer called Devil Facial Tumour Disease, which has caused devil populations to plummet by about 80% on average. The disease has seen numbers plummet more rapidly than with any other endangered species in Australia. Tasmanian devils are still much rarer than they once were and no longer play important ecological roles like consuming carrion and suppressing cat numbers. They seem to think that the decline is slowing but our numbers are down to about 17,000 from a population of about 53,000 back in the 1990s. A lot of work is being done to save them. Resistant devils are being bred in captivity & released, but unfortunately, a lot of their releases have been killed on our roads. Devils are mostly scavengers & with the abundance of wildlife in our state the roadkill is easy pickings until a car or truck comes along.
I woke once to a horrible screeching noise & saw a couple of devils(adult & juvenile) fighting over a dead bird that had hit the window the day before. We really do get nature on our doorstep.
G


Here in Aus cats eat a lot of native animals and also should be kept in their own yards but most people ignore the cat laws.
Click to expand...

same here, every day on FB people are posting about their missing cats, Someone will suggest that they should keep their cat indoors and that just brings out nasty retorts that their cat doesn't want to be indoors. In my opinion, if one of my kids wanted to play in traffic, I wouldn't just let it. Here we have coyotes, bears, bobcats, fisher, any of them will attack and eat a cat, sometimes even fox. And they get hit by cars, so if you love your animals protect them. Same with people who let their dogs run loose, get into people's yards, poop in their yards, chase chickens, and wild game, get porcupine quill, or hit by cars. Sorry for the soapbox but it happens weekly in my area. Neighbors got a new dog a 7 month old rescue, really cute dog, but I have brought her back to her house several times. I am so afraid she will get hit or stolen.
Some cities have ordinances that cats need to be registered and kept indoors, they damage property, scratch cars, etc, people are outraged. Also cats eat a lot of song birds, another issue.

Getting Fit said:
same here, every day on FB people are posting about their missing cats
Click to expand...

yep, it is a sure way to trigger a war between the two factions and it gets worse when the cat owners claim their precious darling would never eat a native bird or other animal, and the cats don't even need to be kept inside, just in their own yard. Things like cat rollers can be attached to the tops of fences or if all else fails a cat enclosure.

Cats eat so many native birds & lizards. People get so stirred up here about cats too (both ways). I think all pets should be kept under our control & not let loose on wildlife. One of my SIL has a rescued greyhound & she lets it roam loose. She'll be moving soon & won't be able to thank goodness.
G

I am doing my happy dance. I started intermittant fasting on Sat and I am down 2 .6 lbs. finally! I go for a long time with scale just bobbing up and down 2-4 lbs even when I am 100% on plan, so I am less than half a pound from a 25 lb total loss. Yay, I bought myself a gift, I had planned to get something when I hit 20 lbs, but couldn't find anything I wanted. I got a hobby style battery powered chain saw. I have a huge gas powered saw, but it is heavy and I am a little afraid of it. I haven't played with this one yet, I am packing up all my wood crafts for a big craft fair tomorrow.