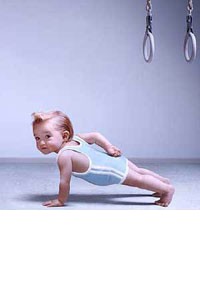 Based on the large number of over-tired parents of small children out there, it is usually assumed that these children are constantly on the move. However, research has found that children are sedentary 73 to 84 per cent of the time that they are awake. Additionally, even though we know that “screen time” can have many detrimental effects on child development both physically and socially, most children are now exposed to “screen time” too early in life and for far too long.

The Canadian Society for Exercise Physiology (CSEP) and ParticipACTION released Canada's first ever physical activity guidelines for the early years. Basically, the guidelines state that all children aged four and under should be moving more and sitting less throughout the day. The following guidelines are based on research of sedentary behaviours of children and are supported by the Children's Hospital of Eastern Ontario Research Institute, Healthy Active Living and Obesity Research Group (CHEO-HALO).

Activity for this age group is usually “interactive, floor-based play” and includes supervised activities like tummy time, pushing and pulling, reaching and grasping, and crawling.

At least 3 hours per day.

Activity for this age group should be varied and spread throughout the day. It is encouraged to expose children to different environments so that they can develop movement skills like running, dancing, playing outside, and climbing stairs.

At least 1 hour of “energetic play” per day.

By this age, children should be engaging in at least 60 minutes of energy-requiring activities such as skipping, riding their bike, running, and hopping throughout the day.

Keep in mind that these are the minimum recommendations – more activity provides greater benefits in a child's life.

Not only is it important to encourage physical activity at all ages, it is also crucial to limit the amount of time spent being sedentary each day. Sedentary behaviours are those that require little movement and include being seated or reclined for long periods of time. Common sedentary behaviours for children include: using computers, tablets, smartphones, playing video games, watching television or movies, and sitting in strollers, high chairs, or any other seat where the child is restrained.

The guidelines for sedentary behaviours for the early years are as follows:

Children should not be seated for more than one hour at a time.

Screen time for children under the age of 2 is not recommended.

Screen time for children aged 2 to 4 should be limited to less than one hour per day.

Keeping children active and minimizing sedentary time creates positive health habits that will, hopefully, continue as the child gets older. You don't have to go out and enrol your kids in every sport out there – it can be as simple as going outside to explore your neighbourhood instead of watching that 30 minute television show.

To download a copy of the Physical Activity Guidelines for the Early Years, you can go to csep.ca/guidelines and participACTION.com.